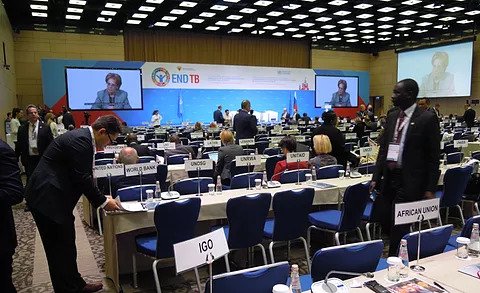 On 16-17 of November 2017 WHO conference addressing Tuberculosis (TB) was held in Moscow, Russia. 1000 representatives of almost all countries, including 74 Ministers of Health participated in this meeting. Dr. Maramov M, current employee of CT had attended this global health event as a member of CI Working Group on Health, representing Caritas Asia.

TB is one of the top 10 causes of death worldwide. It is also the main cause of death related to antimicrobial resistance and the leading killer of people with HIV. In 2016 there were 10.4 million estimated and only 6.3 million of reported new TB cases. This means that 4.1 million unreported cases today stay without attention. The 7 top countries with high TB rate (India, Indonesia, China, Philippines, Nigeria and South Africa) are responsible for 64% of the all new cases.  Caritas is active in 6 out of the top 7 countries affected by TB. Therefore attending this meeting was very important for the confederation.

The main objective of the conference was to emphasize, and recognize the seriousness of TB problem as one of the top killers and address it adequately. The funding gap of USD 2.3 billion for TB prevention and treatment is estimated for 2017. The conference adopted the “Moscow Declaration”, which commits countries to end TB by 2030.